Active Soil Depressurization (ASD) systems is the recommended and most commonly used radon reduction method. This method includes sealing, one or more suction (or draw) points, PVC pipe and a specialized radon fan, ASD acts like a vacuum, drawing air from beneath the slab and venting it safely above the roofline.

ASD is used when soil is exposed in the crawl space and is covered with a specialized plastic (vapor barrier). The plastic is sealed to the perimeter walls and a tee is used to connect to the pipe of the ASD system. While the fan is attached and running, air and gases are drawn from underneath the plastic barrier.

The interior system consists of a pipe that is run from the basement or garage through a closet (or multiple closets, if the home has more than one floor) to the attic. Fire barriers are installed where applicable. The radon fan is placed in the attic and exhausted through the roof, with an appearance similar to that of a plumbing stack. The system monitor is attached to or near the vent line in the basement or closet area.

In a garage system, the pipe is run from the basement, through the box plate (rim joist), into the garage, then vertically along the wall. The radon fan is installed in the garage rafters or attic and is exhausted through the roof, with an appearance similar to that of a plumbing stack. The system monitor is attached to or near the vent line in the garage or basement area.

An exterior system is used when other system placements are not feasible or economical. The vent pipe is routed through the box plate (rim joist) or foundation wall to the outdoors. The fan is placed outside at ground level. The vent pipe runs vertically along the side of the home and exhausts above the roofline. The property owner has the option to paint or box in the vent pipe. The system monitor is attached to or near the vent line in the basement or lowest level of the building. 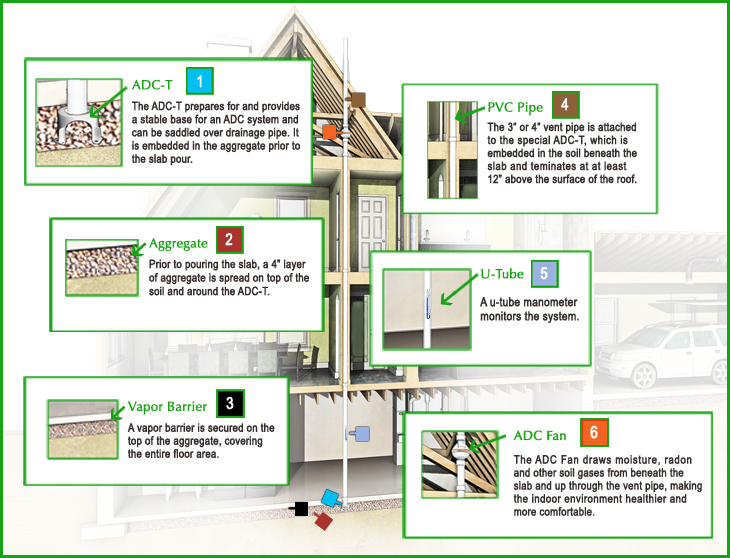 Eliminate some of the toxins and allergens that can cause:

Active Radon Systems / RRNC create a healthier home environment by reducing the likelihood of moisture-related new-home problems such as warping wood, odors and mold or mildew.

Does RRNC with a Passive System Reduce Radon?

A passive system or RRNC may provide some reduction in radon levels based on the natural convection of heat rising up through the home, (stack effect), but an active system will greatly reduce radon levels in nearly every new home. Both terms give the impression that a home is safe from radon, however a home with RRNC or a passive radon system is not guaranteed to resist radon nor is it guaranteed to be radon free.

These two simple and relatively inexpensive additional steps will make a passive or RRNC system active: